This news immediately detonated the magnet industry, and all practitioners are discussing how the price of rare earth raw materials will go. On that day, the daily increase of praseodymium and neodymium metal materials exceeded RMB60,000/ton, and the ton price exceeded one million, while the last highest point was in 2011 (RMB 1.6 million per ton). 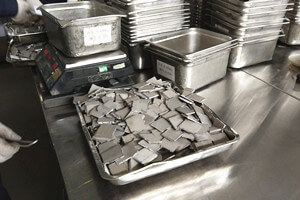 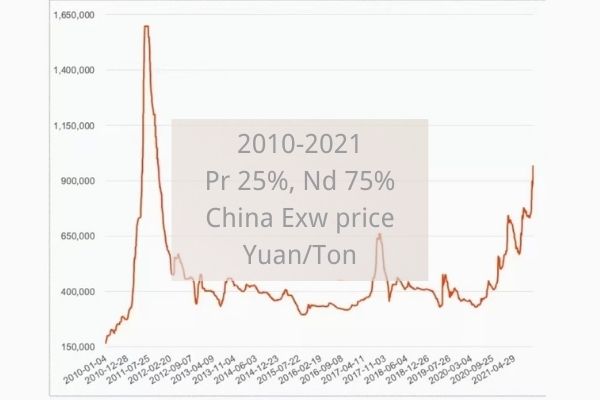 Although the application of rare earth permanent magnets has continued to grow in recent years, the outbreak of the domestic epidemic in early 2020 and the continued epidemic in Europe and the US later led to a significant drop in demand for various industrial products and materials. The market was gripped by pessimism, and everyone has begun to remain vigilant about the uncertainty of the future. Various companies reduced their inventory, whether rare earth material manufacturers, magnet manufacturers or end customers. As a result, from the end of February to mid-June 2020, material prices reached the bottom, with the lowest price being roughly RMB 320,000 per ton. (which now seems too cheap!)

In June-July 2020, with the gradual weakening of the epidemic, the global economy began to gradually recover, and the demand for industrial products also began to increase. In particular, rare earth permanent magnet materials have always been a barometer of economic prosperity for 3-6 months. With the changes in the balance of supply and demand, the market naturally needs price leverage to adjust, so there was an increase in prices after October 2020.

From the PrNd metal price chart, we can see that this round of obvious price increases began in October 2020, with a sharp climb in market prices especially from mid-November to early December 2020. Combined with the market’s cold performance at the beginning of the epidemic, this price increase is undoubtedly driven by the economic recovery after the global epidemic and the increase in demand for magnetic materials.

In fact, our company has been talking to our customers about this topic since the beginning of the outbreak. We mentioned that we remain positively confident about the Outlook for a sharp recovery in demand. But few people really have the courage to stock up, and people are still generally chasing the ups and downs.

In December 2020, due to the short-term increase of praseodymium metal is too high (the highest increase in a single day in November reached RMB 50,000 per ton), many downstream applications were unable to accept the price for a while; in addition, December is a traditional holiday season for Europe and America, customers hold off the purchase and the demand suddenly decreases, which directly leads to the price of praseodymium falling back. Therefore, the price after the surge is difficult to maintain, showing a rapid downward trend.

From January 2021, customers returned from holidays and started a year of centralized magnet procurement, and prices went up. This wave of price increase lasted until early March.

March to June of 2021, customer procurement requirements were basically consumed by the first quarter and began to fall steadily.

After several rounds, the price of rare earth raw material praseodymium and neodymium finally broke through RMB1 million a ton before the end of the year.

China Suppliers Need To Raising Prices and Why？

Characteristics of NdPr Price Chart in 2021

In the environment of the continuous development of the epidemic, countries have launches loose monetary policies as a direct way to save their economies. Take the United States as an example, in 2020, the US government released a huge amount of money, as shown in the figure below. At the same time, the U.S. dollar continued to depreciate against the RMB.

In April 2020, real estate prices in China’s first-tier cities skyrocketed, and then commodities began to rise. Ordinary commodities can’t escape the impact of inflation, not to mention rare earth materials, which are “industrial condiments”.

The price increase of rare earths is more complicated than that of ordinary commodities. In addition to supply issues, national policies have also affected it to a certain extent.

The skyrocketing price is obviously not conducive to the development of the entire magnet industry. The good thing is that it presents the characteristics of a STEPPED INCREASE, that is, there is a period of adjustment after each increase.

This gives customers a certain respite: those who communicate closely with Chinese magnet suppliers are largely able to avoid stepping on the highest purchase prices.

We also reminded our customers at the beginning of this year that price increases will continue to be the keyword in 2021.  If you are the person in charge of magnet procurement of a particular company, you can inform your suppliers of your procurement plan in advance, so that it is easy for magnet manufacturer to provide suitable suggestions or communicate with supplier to prepare materials in advance.

Assuming No COVID19, Will NdPr Price Continue to Rise?

Without COVID19, it is certain that the price of rare earth materials will still keep rising smoothly. The reasons are as follows:

Rare earths are not earths, but a general term for 17 chemical elements such as scandium, yttrium, and lanthanum. These elements often form associated mineral deposits with similar chemical properties, so rare earths are also generally understood as rare metal minerals.

The development of human society needs rare earths, but as a non-renewable resource, what are the reserves and supply of rare earth resources? 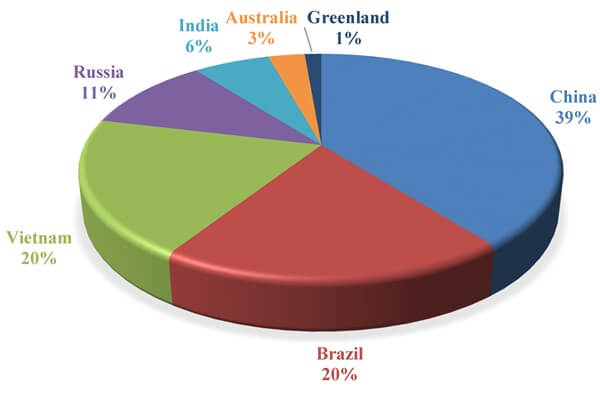 And China in the 90’s was dedicated to construction, and its legislation on environmental protection was not strict. Internal and external factors ultimately contributed to the vigorous development of China’s rare earth industry. As the economy continues to grow, the public is paying more and more attention to environmental protection, so the government has started to rectify and reform the rare earth mining industry.

Lin Boqiang, Director of the China Center for Energy Economics Research at Xiamen told the Global Times that China has no obligation to be a “rare earth supplier” to the world, China’s rare earth must ensure the safety of the supply chain and the sustainable development of the environment.

Bloomberg reported that the Weld Hill mine in Australia and the Mount Pleasant mine in California now produce a quarter of the world’s rare earths, while China’s market share of global rare earths supply has fallen from 98% in 2010 to 58% in 2020, and the cheap rare earths are gone forever.

Rare earths are not rare, but extremely versatile, and are essential raw materials for the production of high-tech consumer electronics and military products. Cell phones, electric cars, aircraft turbine engines, and missile guidance systems are all dependent on them. Meanwhile the rapid development of electric vehicles in recent years has been regarded as one of the most important application areas for rare earth products.

Most countries have been promoting green energy in the past few years and plan to stop selling new gasoline and diesel cars.

In recent years, the sales of electric vehicles in China have also been increasing year by year. For example, China Great Wall Motor increased production by about 152% year-on-year in February 2021. And from January to February 2021, BYD Auto’s sales of new energy vehicles climbed 207.3% year-on-year.

How Will NdPr Price Chart Develop in 2022?

It is expected that during the “14th Five-Year Plan” period, domestic rare earth supply will still be restricted by total mining indicators, and high-pressure supply-side policies such as crackdowns and environmental protection will continue.

Overseas rare earths are currently constrained by factors such as construction and production cycles, the supply side is difficult to have a large-scale production release in the short term.

In the next five years, the increase in overseas supply is relatively limited; the global supply and demand of rare earths may be in a tight balance for a long time. We expect rare earth prices to increase steadily in 2022. At present, the price of neodymium praseodymium is fluctuating at a high level, and it will continue at least until April to May next year.