Recently, the customers whose rare earth magnets buy from China are very worried about the price of rare earth material. For suppliers, these days are also sleepless nights.

Neodymium and Praseodymium are rare earth elements. In short, it is NdPr. Rare Earth metal is the most important raw material for rare earth neodymium magnet and rare earth samarium cobalt magnet.

It is the core raw material enabling the next industrial revolution – E-mobility. More than 85% of all electric passenger cars and mild hybrids are using the NdFeB permanent magnet motor technology which relies on this raw material.

For a long time, the raw material price is relatively stable. Until 2010, Japan detained a Chinese fishing trawler captain. China ban rare earth exports to Japan after that. And then rare earth prices were skyrocketed, especially PrNd Mischmetal and Ferro-dysprosium material. 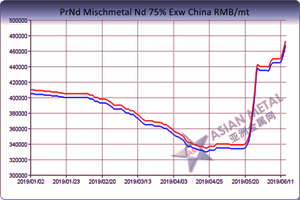 Since 2012, rare earth prices have fallen back to normal levels. But as trade tensions rise between the U.S. and China, rare earth minerals are once again in the political spotlight.

The U.S. government lists rare earth among minerals deemed critical to the country’s economic and national security, and the Trump administration notably exempted rare earth elements from tariffs it imposed on $300 billion worth of Chinese goods.

On the other side of the trade conflict, Chinese President Xi Jinping has recently visited Jiangxi Province, which is the central hub of China’s heavy rare earth raw materials.

Many reports have speculated that China may be planning to weaponize the rare-earth industry to make the US back down in the ongoing trade war.

The US relies heavily on Chinese exports of rare-earth materials, which can be found in products ranging from batteries to smartphones, Teslas, and fighter jets.

After his visit, the price of PrNd and DyFe material shot up. As we mentioned earlier, neodymium magnet is also made of rare earth metal. So, rare earth magnet price followed closely and increased.

Although the price rise is not as severe as in 2010, we should not take it lightly. Because China

The above moves affect rare earth supply. If the rare earth is in short supply relative to the demand, the price will be bid up too.

During this special period, we are sorry to inform you that our magnet prices will only be valid for 24-72 hours and apologize for any inconveniences this may cause. Please don’t panic and keep close contact, we will update the latest trends and help you purchase at the right time.

If you have purchase plan recently, we suggest you increase your order quantity and keep a little bit of safety stock on hand.