Scientists have done a lot of related research and have designed Halbach arrays in different forms. They have continuously studied how to maximise the magnetic flux, from traditional to improved, from single to dual, unequal, from dipolar to quadrupole, hexapole, sextupole, octupole and other magnet configurations.

Depending on the arrangement of the permanent magnets, Halbach arrays are available in the following types.

When making more complex magnet assemblies like the halbach array, production requires not only strong permanent magnets, but also materials to make various clamps and to hold the magnets in place.

Halbach array is designed to achieve maximum magnetic fields, so in general neodymium magnets are the most frequently chosen. In particularly high temperature environments (>200°C), samarium cobalt is the best choice.

In addition magnet material prices has become an uncertain factor for halbach array development. You can choose the most suitable halbach magnet material according to magnetic force, working temperature, corrosion resistance and price for your project.

Need a quote, or want to know more about the typical restrictions that exist when designing a Halbach style magnet, you are always welcome to contact us!

We Are Proud to Supply Halbach Magnets to the Following Organisations:

Currently there are three ways to implement the Halbach array stack structure.

As Halbach array is a special arrangement of the magnetic poles. It is difficult to form target arrangements due to the strong repulsive magnetic forces. In addition, some Halbach structures are complex and it requires specialist skills and custom-made jigs to assemble them, which makes Halbach arrays expensive to fabricate.

We are able to design our own jigs/fixtures and and manufacture them in our factory. Whether it is Halbach cylinder for scientific experiment or a large volume requirement for your product, we can meet your needs. 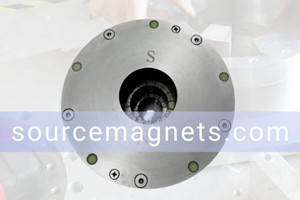 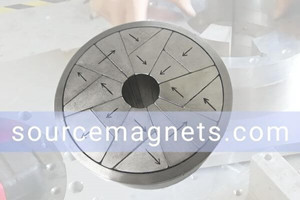 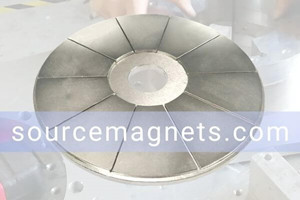 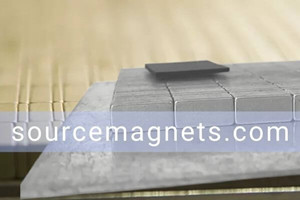 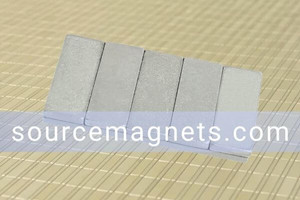 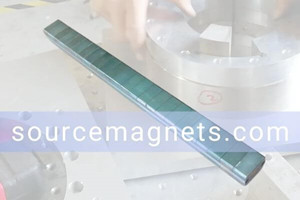 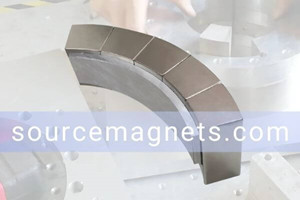 What Are Halbach Arrays?

The Halbach arrays are a type of magnet arrays with unique arrangement.

They have the following features:

How Does A Halbach Array Work?

Using Halbach magnet array, magnetic flux can be enhanced on one side (strong side) of the array while the flux cancelled on the other side (weak side). This leads to more efficient use of the available magnetic flux, giving stronger fields than other configurations.

The goal of this magnetic component structure is to produce the strongest magnetic field with the smallest amount of neodymium magnets. It can help to make more compact and strong permanent magnets assembly for industry. For example, Magsafe utilises a similar structure.

It is similar with pot magnets and rubber magnets in making magnetic force concentrate on one side.

But mounting pot magnets use a steel channel or cup to redirect the magnetic field from the backside of a single magnet, which roughly doubles the pull strength you might expect from the magnet alone. The magnet in cup magnet is usually a complete piece and the poles are also magnetised through thickness.

The rubber magnet is a full piece of soft magnet with the similar poles as the halbach arrays.

And halbach arrays are more complex structure using at least 5pcs rare earth magnets instead of single magnet. It will have stronger magnetic force and of course cost more.

Do You Need a Halbach Array?

Halbach array has superior magnetic force, but also has disadvantage of complex assembly process and high cost. It is important to consider the difficulty of design and manufacture before implementing a Halbach Array.

Large Halbach array rings are very difficult to assemble because of strong magnetic force. You can assemble them if you have a suitable workshop and appropriate tools and of course a lot of patience.

We have a customer, who needs a Halbach array used in a particle decelerator as a transverse focusing element. Considering very small size and hard to control the tolerance, our engineer suggest customer to use the normal direction. And finally, we made it successful and cost-effective.

What Are Halbach Arrays Used for?

The first instance of a halbach array was introduced in 1979 by Klaus Halbach at Lawrence Berkeley National Laboratory.

He was studying the uses of rare-earth cobalt permanent magnets (PM) at the time. With this array he managed to create a nearunidirectional magnetic field, namely a dipole field, requiring no external power supply.

In the 1990s, halbach arrays were successfully used in a new generation of particle accelerators, free electron lasers and synchrotron radiation devices in the field of high energy physics.

In recent years, halbach arrays have received extensive attention in both academia and industry due to their unique advantages. More and more scientists have carried out specific research on them, and more and more fields have used them.

Halbach arrays have been found to be useful in a variety of interesting applications, ranging from singledegree of freedom (DOF) actuators, magnetic levitation, multi-DOF actuators, electro-mechanical batteries, and more efficient electric rotational machines.

Others applications of halbach arrays include:

The Halbach array magnet is also used on nasa’s Mars rover. It is a scientific experiment that collects dust on the Mars Exploration Rovers, Spirit and Opportunity.

Many halbach array magnet assemblies we produced are also used in scientific experiment projects at universities and research institutes around the world.

When the permanent magnet is arranged in Halbach array, the most notable feature is that the air gap flux increases, while the rotor yoke flux decreases, and the sinusoidal air gap magnetic field is obtained easily. These are very beneficial for reducing the motor volume and increasing the power density. So halbach array is a hot research topic for motor researchers in recent years.

For example, the magnets used in the Tesla Model 3 motor are arranged in a halbach array. The increased efficiency of the magnetic circuit allows a stronger magnetic field to be produced with fewer magnets, thus making the Model 3’s motor smaller and lighter, but it is more powerful than other motors.

Beside fridge magnets, this seems to be the first mass use of Halbach-Arrays in a consumer product.

Other Magnet Arrays For Sale 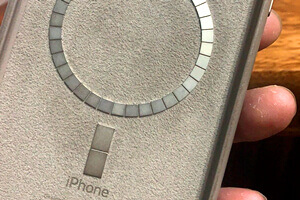 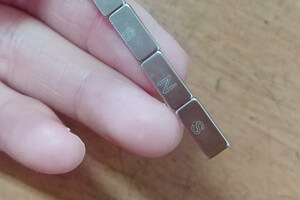 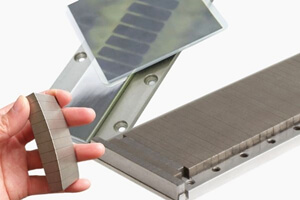 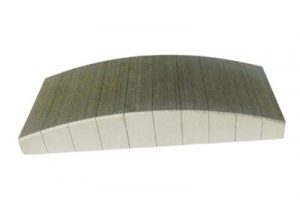 There are various different assemblies and arrangements available. Working with an experienced magnetic engineering company is essential for determining if a Halbach Array is the right solution for an application.

China Magnets Source provides Halbach arrays in either linear/flat/block or ring/cylinder arrangement. At the same time, we can supply the units as single magnet or halbach array assembly in a suitable housing (brass or aluminum sleeve). Contact us if you have any requirement for halbach array.