When it comes to buy magnet in prototype quantity or volume production quantity, most customers choose to buy rare earth magnet from China.

Since the early 1990’s, a large number of Chinese companies have been involved in study the manufacturing of rare earth magnets as China has discovered the world’s largest rare earth mine in Inner Mongolia.

At the same time, China’s abundant labor force has sent a large number of industrial workers to the magnet industry. Driven by the huge global market demand of rare earth magnet, lots of rare earth magnets are exported from China to all over the world.

Coupled with pollution problems, it directly caused U.S. rare earths miner Molycorp, which once accounted for 40 percent of global supplies of rare earths, to shut down rare earth mines in 2002.

Rare earth magnets can be used for a variety of applications including serving as important components of weapons systems, high performance aircraft, MRI, PM motor, toy, smartphone, TV and Headset. It can be seen that these applications cover a wide range of industries.

Moreover, in some products, such as smartphones, glass, electric vehicles and jet engines, rare earth magnets are an essential component and hard to be replaced by other available materials. This has caused companies like Apple that depend on rare-earth magnet from China have nowhere to turn.

Types of Magnets From China

A neodymium magnet (also known as NdFeB, NIB or Neo magnet) is the most widely used type of rare-earth magnet. It is a permanent magnet made from an alloy of neodymium, iron, and boron to form the Nd2Fe14B tetragonal crystalline structure.

A samarium–cobalt (SmCo) magnet, a type of rare earth magnet, is a strong permanent magnet made of two basic elements samarium and cobalt.

A ferrite is a ceramic material made by mixing and firing large proportions of iron(III) oxide (Fe2O3, rust) blended with small proportions of one or more additional metallic elements, such as barium, manganese, nickel, and zinc.

Alnico magnet is permanent magnet that is primarily made up of a combination of aluminium, nickel and cobalt but can also includes copper, iron and titanium.

Bonded magnet materials can be created through Injection Molded and can be made from NdFeB, Strontium Ferrite or a combination of the two. Bonded magnets that are created through injection molding can be molded into complex shapes and also molded directly onto components.

Shipping magnets is a more complex work as we have to consider the impact of strong magnetic force to aircraft. The magnets will attract ferrous objects, we also need to prevent this.

The standard packing for permanent rare earth magnets is as below: carton + Eight-hole foam box + six side iron sheets.

For some big and extreme powerful neodymium magnets or magnetic assemblies, we will use wood plank to separate each magnet and then pack them by big wooden cases.

China Magnets Source Material Limited has been exporting cost effective rare earth magnet products for our global partners since 1990. Our highly skilled staff has extensive experience in packaging permanent magnet and make powerful magnets shipped safely all over the world. 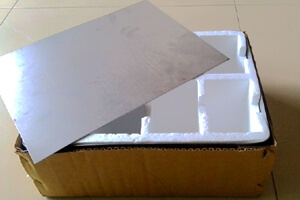 Are you interested in learning more about what we have to offer you?

We are more than happy to provide additional information about our permanent magnets products or services. For magnet pricing details, service timelines, magnet ordering information, or any other questions you have about China magnet, contact us through the form below.